How The Church Became a Theater 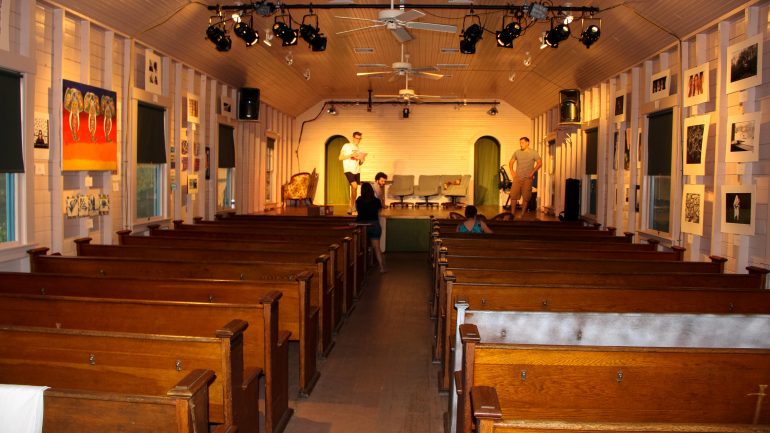 Having three docks near it, Sacred Heart Chapel was built to accommodate worshippers of Holderness, Ashland, and Sandwich, who found water transportation to be an easier way rather than traveling by land. Currently, there are several Catholic churches in Holderness including Holderness Community Church, Trinity Church, and Saint Peters Church.

When the Diocese of Manchester agreed on the sale, they performed one final ritual called de-consecration, also called secularization. In general, it means that a surviving church will no longer be used for religious purposes. There are many reasons why the church is usually abandoned. Either due to lack of repair thus seem dangerous for worshippers, the building being too small or too big for its congregation, or the institution attached to the church is shut down. In November 2018, an international conference was organized by the Vatican to create rules on how to secularized old churches. Prior to the conference, they invited the public to share photos of churches that were reused in a positive way, since most media attention only highlights churches turned into night clubs and gyms.

The Vatican was sure pleased that the old church in Holderness which was deconsecrated in 2003 turned into a center for creativity for the community. As required by the Catholic church, all religious relics were removed except the original pews. To respect the church’s history as a place of worship, the stage where mass was held, the cross that sits atop the roof over the front door, and the stained-glass windows were retained.

Austine Howard, with her vision to create a gathering place for creativity in the performing and visual arts in her new homeplace, renamed the old church to Little Church Theater. In its run, the place had seen various plays, programs, and events that educate and entertain the residence of Holderness and surrounding communities. She initially wanted to bring actors from New York and LA but it turned out that the community embraced it and thus became a community theater.

Jessica Davis, an American writer, and play director lives just seven minutes away from Little Church Theater and has put up four hit plays at The Little Church Theater: Dearly Beloveds in 2018, The Salon in 2015, Houseguests in 2013, and wRites of Reunion in 2010. Little Church Theater produced mostly original plays and that was one of the things that drew playwrights in the area including Davis. Founder Austine Howard says former parishioners were the theatergoers at the Little Church theater and they often reminisced the time they spent in the old church. Guests of the theater house just have wonderful memories of the place and thrilled to see it being used in again for the benefit of the community. During performances, actors perform on a stage that was once both altar and pulpit. The audience sits in pews in the former nave, and additional seats were added in front.